Dr. Albert Einstein at The College of the City of New York in April 1921 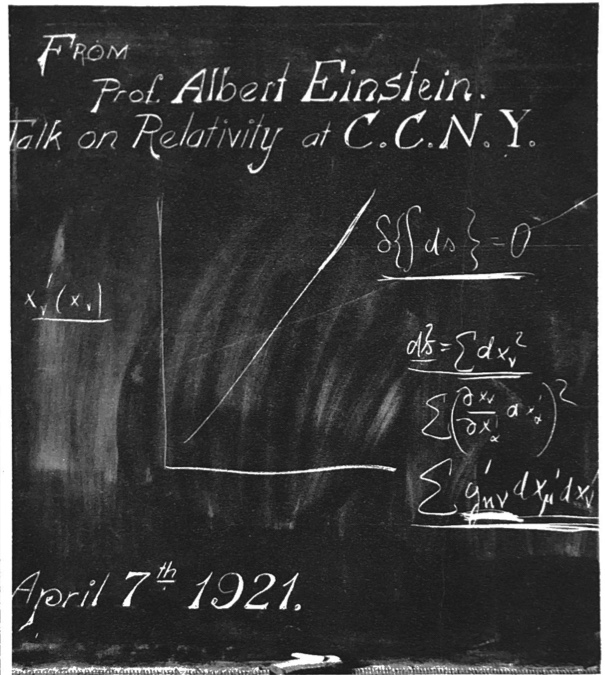 The afternoon of April 7, 1921, Dr. Albert Einstein, world-famous scientist from the University of Berlin, attended a lecture at The College of the City of New York. This was his first visit to any American academic institution, and the first of five visits to City College. Much of the credit for this visit was due to Dr. Rheinhard A. Wetzel of the Physics Department, who was well acquainted with Dr. Einstein and had communicated with him for several years.

The lecture was on The General Relativity Theory, delivered by CCNY alumnus (class of 1896) and Columbia University Professor Edward Kasner. Following Professor Kasner’s lecture, Dr. Einstein spoke for twenty minutes, during which he filled a blackboard with algebraic formulae as part of his discussion of relative motion.

Throughout New York City there was a great deal of anticipation when Dr. Einstein made it known that he would arrive in New York harbor on April 2, 1921 for his first trip to the United States. A crowd of thousands gathered in Battery Park to await his arrival, while reporters and dignitaries interested in his theory of relativity came aboard the ship to meet Dr Einstein. City officials, including Mayor John Francis Hylan, were eager to greet Dr. Einstein. Mayor Hylan bestowed the honorary award the 'freedom of the city' on Dr. Einstein and chemist Dr. Chaim Weizmann.

As with the rest of the city, the CCNY community got into the spirit of Professor Einstein’s visit. In the student paper, The Campus, the “Gargoyle Gargles” column printed a satirical play based on the events of Dr. Einstein’s visit as “Relativity – A Play in One Act” and physicist Hendrik Lorentz's (whose own work contributed to the discoveries of Einstein) 1920 book The Einstein Theory of Relativity: A Concise Statement, which explains and distills Einstein's work, was reviewed in the “In the Library” column of the same paper. 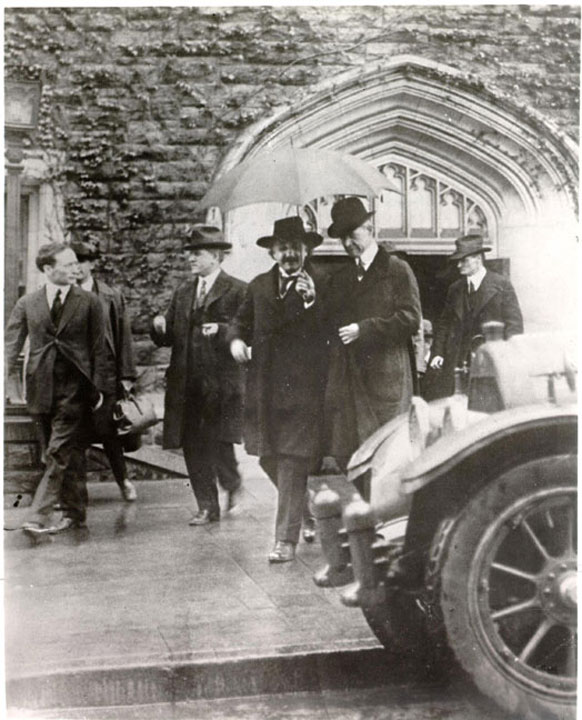 Monday, April 18, 1921, Dr. Einstein gave the first in a series of four consecutive afternoon lectures concerning the theory of relativity for faculty members of the scientific departments of City College and other colleges in the vicinity. Dr. Einstein gave his remarks in German to the audience in the Doremus Lecture Hall, in Baskerville Hall. Professor Morris R. Cohen (CCNY Class of 1900, Mathematics and Philosophy Departments) was asked to translate and summarize Dr. Einstein’s lectures from German to English. This was the beginning of a friendship between these two academics that lasted until Professor Cohen’s death in 1947.

The climax of Professor Albert Einstein’s visit to the College was his appearance at the Chapel session in the Great Hall the morning of Thursday, April 21. Former City College President Sidney E. Mezes introduced Dr. Einstein, citing the distinguished and honorable guest as a man who “is considered as among the greatest of the five or six illustrious scientists of the world.” The Campus reported that “as Dr. Einstein rose from his chair and walked slowly across the platform, he received an ovation from the audience. Dr. Einstein spoke in German, expressing his appreciation for the warm welcome he received. ‘It gives me the greatest, pleasure, on this, my first visit to America to have this opportunity of meeting-the student body of this great university. I appreciate very, much your friendly reception and applause and extend to you all my heartiest good wishes.’”

Following the Chapel ceremony, the audience was invited to walk to Lewisohn Stadium to pose for a panoramic photograph. President Mezes led Dr. Einstein to the Stadium and Dr. Wetzel accompanied Mrs. Einstein. The College faculty and 3,500 students assembled for this picture. While on the field, Professor Charles Baskerville offered Dr. Einstein a cigar and Mrs. Einstein scrutinized the cigar closely, remarking: “It is perhaps too strong for my husband.”

Photo 1: This picture of a blackboard Dr. Einstein used with algebraic formulae for his demonstration of a discussion of relative motion following the lecture on The General Relativity Theory given by Professor Edward Kasner on April 7, 1921. This picture was published in the New York Evening Post on April 23, 1921. (CCNY Archives)

Photo 2: On April 21, 1921 Dr. Albert Einstein spoke in the Great Hall following his introduction by former City College President Sidney E. Mezes at Chapel. Dr. Einstein is seen here leaving Shepard Hall under an umbrella held by President Mezes. Dr. Rheinhard A. Wetzel is to their left and on the far left is Dr. Morris Cohen. (CCNY Archives)

Enter your e-mail address to receive notifications of new posts by e-mail.